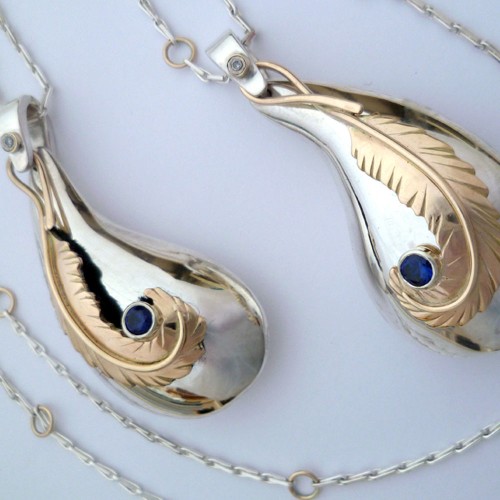 By administrator on September 4, 2014 in

I was looking for something extra special and unique, for my two daughters in memory of their Father. I searched but couldn’t find anything just right…

He suggested capsules rather than lockets, and asked us to think of a significant symbol, we decided on a feather, I had drawn a few sketches of what I was considering, with the feather as a gold, embellishment over the silver droplet capsules; Anthony made the feathers by remodelling old broken but significant gold jewellery of mine and other important family members. Through further discussions and drawing proposals all aspects of the designs were concluded, and the making of two pieces of handcrafted jewellery, for my daughters began.

Anthony built on and refined the initial idea and styled the two pieces perfectly. There was a great deal of work that went into the making of the silver tear drop capsules. The weight of the silver capsules was substantial and as thus had to have the right chain to support them, he was very conscious of this and took pains to find the appropriate type.  Anthony put a tremendous amount of thought and care into the design and making of the two beautiful keepsakes for my daughters. My daughters are so pleased with the creations that he produced they are totally unique even from each other.

I can only say a big thank you to him.